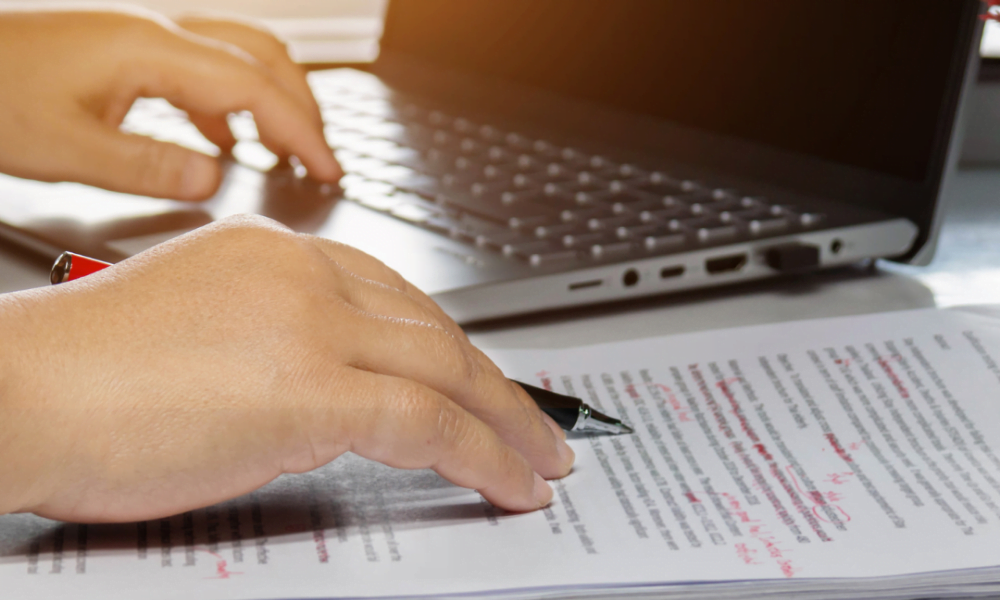 Have you ever made an embarrassing typo?

Perhaps you’ve never made one that attracted quite so much ridicule as the infamous ‘covfefe’ gaff by Donald Trump but, still, typos are undoubtedly something you’d rather avoid at all costs.

In this post, we take an in-depth look at typos – from the 12th century demon, Titivillus, who distracted scribes working on copies of the bible, to a modern psychological understanding of why we make typos. We’ll also look at the negative effects of making typos, why it’s so hard to reliably spot typos in your own work and some of the methods of finding and fixing typos.

Why we should avoid typos

While no one intends to make them, avoiding making typos is hard. You’ll notice and correct most typos immediately and many will be fixed by your word processor’s autocorrect function as you continue typing. However, some will manage to evade both you and your spellchecker. These typos are why it’s important to have your work proofread for mistakes that were missed during the writing process.

Typos that haven’t been fixed can be embarrassing and frustrating. Results of studies show that spelling errors can affect how people perceive writers, and making typos can negatively impact your perceived trustworthiness and credibility. Web visitors are almost twice as likely to leave a website with grammar and spelling mistakes than a site with correct grammar and spelling, according to a study conducted by Website Planet in which participants were shown landing pages for websites, some with typos and some without. Visitors spent 8% less time on the landing pages with typos and the bounce rate for these pages was a whopping 85% higher than for the pages without typos.

But even if you’re aware of all this and try to avoid making typos as much as possible, have you ever wondered why we make so many typos?

Why do typos happen?

A possible answer for why typos happen takes us back as far as the 12th century to references of a demon called Titivillus (also Tutivillus). This imp was first depicted carrying a sack to collect any words that have been skipped over or mumbled in sermons and prayers by careless worshippers. By the 13th century he was depicted with a parchment to write down any idle gossip and chatter from churchgoers who were supposed to be in prayer or silent. At some point, possibly during the Renaissance when the increased demand for bibles caused scribes to rush their work, he came to be associated with misprints and typographical errors (i.e., typos).

Scribes worked from sun-up to sun-down in stuffy, badly lit rooms to meticulously copy the bible by hand. It was a laborious task and Titivillus served as a warning to scribes not to become inattentive to their boring work, lest they make a costly mistake. However, he also provided scribes with an excellent excuse for their errors, as they were able to blame mistakes on Titivillus for distracting them and causing them to slip up. For this reason, Titivillus became known as the ‘Patron Demon of Scribes’.

So, if you’re having trouble avoiding typos, maybe it’s because Titivillus has been looking over your shoulder! Fortunately for us, typos are generally fixed in the digital age with the help of the backspace key. Spare a thought for those poor scribes, whose printed errors were often permanent!

The psychology of typos

If a demon from the Middle Ages causing your typos seems a bit farfetched, you might be interested to know that there are some other possible reasons for why you make typos. And it has to do with how your brain works.

Researchers believe that our brain groups related words together in our memory, making it easier to quickly recall words that are often used together. However, the word that is most closely connected isn’t always the right one. For example, consider the trick question about what cows drink. Often, we will mistakenly answer ‘milk’ instead of ‘water’ because the association between cows and milk is so strong. When your brain hears ‘cows’, it is preparing to respond with associated words like ‘milk’ or ‘farm’ or ‘moo’. So, when it hears that it needs a word for something that is drunk, it quickly responds with ‘milk’, because that’s a word that seems to fit.

Another way our brain can make mistakes is to do with how we learn to type and how our brain checks the spelling of words. To get faster at typing, we’re teaching our fingers the patterns of movement needed to input characters in a certain order. To check that we’ve used the right letters in the right order, our brain is paying attention to how the word sounds. However, this process isn’t foolproof. If we pick the wrong pattern of movement and type ‘your’ or ‘its’, instead of ‘you’re’ or ‘it’s’, our brain will have a harder time spotting the mistake because those words sound the same.

We can also make typos when we’re distracted. Even a quick interruption of three seconds is disrupting enough to double the chances of making an error, as found by a Michigan State University study. Students were given a simple, menial task to complete on a computer and were randomly interrupted with a distraction. Two letters would flash on the screen and students were required to type them in order to continue their work. Even though the distractions were incredibly brief and simple, students “lost their places or made mistakes twice as often after those distractions as they did without interruptions”.

The reason even a brief interruption can be so disastrous to our concentration might be explained by something called cognitive load theory: “The basic idea that cognitive capacity in working memory is limited”. Your brain can only think about so many things at once. So, when you’re writing – and thinking about what you’re writing – distractions and stress can be an unwelcome drain on the brain’s attention limits. If your brain reaches those limits, it might stop focusing on things like which keys your fingers are pressing or whether it should be ‘affect’ or ‘effect’ in the sentence you’re writing.

In today’s world, with so many possible interferences and demands on our time, it’s easy to see why we might be making a lot of typos. So, if you want to avoid making typos, it seems like one useful method is to avoid distraction as much as possible. Clearly, though, it’s not possible to avoid every single disruption in our lives and, even if we did, it probably wouldn’t be enough to eliminate typos altogether.

So, you’ve minimised all possible distractions in order to focus on writing great, typo-free content, but chances are that even if you reduce the amount of mistakes you make, you won’t prevent typos completely. This means you’re going to have to find and fix your typos to make sure they don’t end up in your final copy.

But finding typos isn’t as simple as just rereading your work. While checking your writing for errors is an important thing to do, you’re not guaranteed to find every mistake you’ve made.

Even if you’re focusing really intently on finding any mistakes, your brain can deceive you into missing them. This happens because when we read, our brain is trying to make it easier for us to complete the process of turning letters into words, words into sentences, and sentences into meaning. Rather than getting bogged down in the detail of every letter, our brain leverages our knowledge and expectations to take shortcuts to meaning. For example, if you’re writing about something that happened in 4/2/2008, you might accidentally write 2/4/2008 or 4/2/2018. Then, when you reread your work, your brain doesn’t see the mistake because it already knows the date you’re talking about. It doesn’t bother investigating what the actual written date is because it thinks it knows that information already. It’s a shortcut that can be very helpful to free up brainpower for understanding something you’re reading, but it can be difficult to turn off when you actually want to look at the details.

This use of expectation helps speed up the reading process and it’s why we’re able to read those crazy passages of writing you’ve probably seen, where the letters in all the words are scrambled. Our brain knows what should be there and is only making a basic check to see if the text seems to match that expectation so it can use the spare brainpower on other things. This is part of why it seems much easier to spot mistakes in other people’s work than your own. Your brain is less sure of what to expect when it views a piece for the first time, so it pays more attention to the details.

So, now you know all about why typos happen and you’ve done everything you can to prevent yourself from making them. You also know why it’s hard to find typos in your own writing, but you still need to make sure your work doesn’t have any mistakes in it before you publish or print it. Well, there are many suggested methods that will help you find typos in your own work, including changing your font or background colour, printing your work out, reading it backwards, and pausing at punctuation. But one of the most common, effective and reliable methods is to have someone else proofread your work.

In many professional settings, anything written must go through several steps of internal review and approval before publication or printing. Despite having multiple pairs of eyes reading a piece of work, mistakes can still get through. This might be because your colleagues are already too familiar with the content you’ve written to truly see it with fresh eyes, or maybe they’re suffering from the same distractions that caused you to make the typos in the first place. Even if they’re seeing it for the first time and you’ve locked them in a quiet room to read it, they might not have the attention to detail needed catch every single mistake. Proofreading is a specialised skill which not everyone is suited to.

As we know it’s likely that typos will happen and some of these mistakes will go unnoticed by yourself and your colleagues, if your organisation is struggling to find a reliable method for preventing typos internally, this is where you should start thinking about using professional proofreaders. Hiring a professional proofreading service can ensure typos are caught before you publish or go to print, providing you with extra peace of mind, and additional time to do what you do best in your busy role.

Catch the Sun Communications has extensive experience helping clients produce copy that’s free of typos. We can operate with your business to provide a service which fits seamlessly into your workflow and production schedule. Contact us now for a quote.